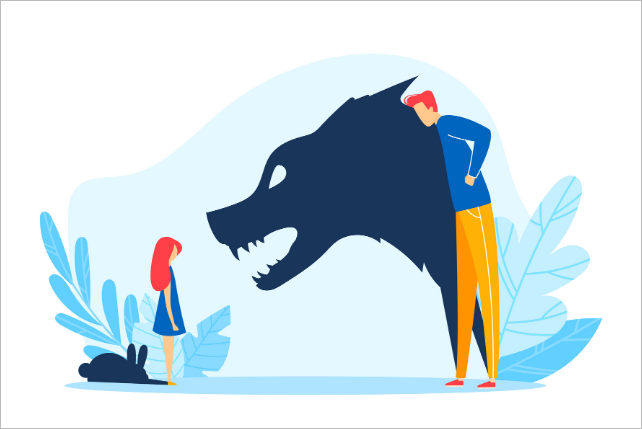 “The scars you can’t see are the hardest to heal.” ~Astrid Alauda

On a lazy Sunday morning as I lounged in bed, I picked up my phone, scrolled through my news feed on Facebook, and decided to Google my parents’ names.

I am estranged from my parents, and I have not had much of a relationship with them in over fifteen years; however, there’s a part of me that will always care about them.

I Googled my mother’s name first and found the usual articles about her dance classes, and her name on church and community bulletin boards. From what I was able to find, it appeared she was doing well.

Then I went on to Google my father’s name. The first item I came across was an obituary posted on the website of a business that provides cremation and burial services. However, there was no actual obituary, only a few pictures of a much younger man and a profile of a much older man.

Was this my dad’s obituary? It couldn’t be, could it? In shock, I convinced myself that it wasn’t his obituary, but I could not shake the nagging feeling that it was.

For the last month I had a feeling that something was off, that something terrible had happened or was going to happen. At the time I attributed these feelings to work stress and the global pandemic.

When I learned of the death of one of my mentors, who had been like a father to me, I attributed these feelings to this experience. Could I have been wrong?

Later that morning I decided to search for my dad’s name in the obituary section of the online local paper. His name came up instantly, and much to my horror, this was how I learned about his death.

Shock washed over me as I read the obituary. He had been dead for a month when I began having those intense, unsettling feelings of foreboding, as if something terrible had happened. It all made sense.

My full name, which I had legally changed several years ago, was mentioned in the obituary under his surviving relatives, which quickly turned my feelings of shock into rage. Did my family think that I didn’t care about him? Did they think that I didn’t have a right to know about his death?

I reached out to members of my estranged support group only to learn that many others had found out about a parent’s passing in the same manner.

Years earlier I had feared that I might find out about one of my parents passing through Google; however, I had dismissed the fear and forced myself to believe that someone in my family would tell me if one of my parents had passed.

In the days and weeks that followed I continued to Google my dad’s name. As I read tributes written by friends and other family members, I was hit with the realization that I did not know the person they were describing.

He was described as a “simple religious man who was a welcoming neighbor, a devoted friend, family man, and an excellent father.” To me, however, he was none of those things, and as I continued to read the tributes, sadness and anger washed over me, and I was forced to reflect on the painful relationship that I’d had with him.

In kindergarten I remember him telling me over and over, “You are as dumb as a post.” Later, after a visit to see his father, he repeated his father’s hurtful words, “You’re a wild hair, and you’re going to come to a sad end.”

He continued to repeat these words on a regular basis throughout our relationship. Every mistake I made was met with harsh judgements, such as “You will never be good at that, you were just wasting your time, you were never going to amount to anything.”

When I failed, he rubbed my failures in my face, and to this day failure is one of my greatest fears despite becoming a somewhat successful professional and academic.

Time and time again, he told me:

“It would be much easier to care about you if you did well with your studies.”

“You’re illiterate, you’re a delinquent, you’re a dunce, and you are an embarrassment.”

“You are never going to amount anything; you are going to end up working a minimum-wage job with angry, stupid people.”

“You are fat, you are lazy, you are unfocused, and you are wasting your time with that stupid piano; you will never amount anything with that hammering.”

After I broke up with my first serious boyfriend, my father told me, “What do you expect? A person like you is naturally going to have problems with their relationships, I fully expect you to have serious problems in your marriage as well.”

When I was preparing to move away to go to university, he told me, “When you flunk out, don’t expect to come back here, just find a minimum-wage job and support yourself.”

It’s taken me years to realize that comments like these are verbal abuse!

Verbal abuse can be disguised in the form of a parent insulting a child to do better, to push themselves to be more, to lose weight, or enter a particular field. It can be disguised as caring or wanting to push someone to be a better version of themselves. Regardless of the parent’s motive, insults and put-downs are, in fact, verbal abuse, and no number of justifications can change this.

Verbal abuse can have devastating effects on a child’s life, and these effects can be felt well into adulthood.

Throughout my childhood and into my teens, my parents’ abusive comments caused me to believe that no one would want me and that I was not good enough for anyone. This limiting belief inhibited my ability to form friendships. As a result, I spent much of my childhood and my teens alone, playing the piano or spending time with my pets.

The friendships that I did form were often one-sided because I made it very easy for people to take advantage of me, because I believed that I had to give and give in order to be worthy of the friendship.

I also feared failure more than anything else and became very anxious in any environment where I might fail. This inhibited me from trying new things, and I only engaged in activities I knew I was good at.

It was not until my mid-teens that I met a mentor who not only saw my work but loved me and nurtured me as if I was his own daughter. For the very first time in my life, I had an adult to support me apart from my grandmother and my grandfather, who believed in me and reminded me every day of my value and my abilities.

“You are good, you are smart and highly intelligent, you’re capable of doing anything you set your sights on,” he would tell me. At first, I did not believe him, but in time I slowly began to see myself through his eyes.

He talked to me the way a loving parent would have. When I failed, he didn’t make fun of me; instead, he encouraged me to reflect on what I’d learned from the experience and how I could do better in the future.

He distilled in me the foundation of shaky self-confidence that enabled me to have the courage to apply to university. Without this relationship, I would likely not be where I am today because I would not have had the courage to break free from the verbally abusive narrative my parents had taught me to believe, or to challenge this narrative.

As I was reading attributes about my father in tributes from people who knew him, I was filled with a sense of longing. Had my dad been the man who was described in those tributes we could have had a healthy relationship, and I would not have had to make the painful decision to cut him out of my life.

At the same time, these tributes forced me to accept that we are many things to different people. To some people we are a wonderful friend, a kind neighbor, and a loving parent, but to others we are a rude jerk, a self-centered person, and verbally abusive or neglectful parent. Each one of us has the right to remember the dead as they experienced them and honor their memory as we see fit.

Years after cutting my parents out of my life I silently forgave them for the hurt they had caused me, and I worked to let go of the pain from the past. However, at times, I found myself fantasizing about what a healthy adult relationship could look like with my father.

I imagined mutually respectful philosophical discussions, long walks, trips to far off places, and most importantly, being seen not as an unlovable failure, but as a successful adult worthy of love and acceptance.

My last conversation with my father before my grandmother had passed away was positive, which only fueled these fantasies. Yet in these fits of fantasy, I was forced to accept my father for who he was and acknowledge the painful fact that some people are just not capable being who we need them to be.

We can choose to plead for a relationship that will never be, or for the person to be something they are not, or we can choose to accept them as they are and accept ourselves in spite of their abuse. But this means we must let go and accept that the future holds time we can never have together.