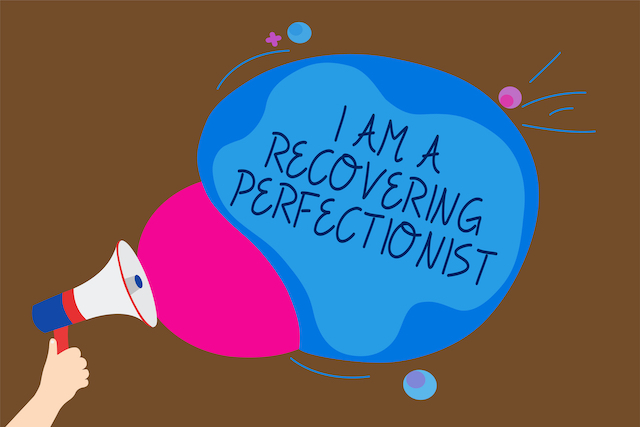 “A meaningful life is not being rich, being popular, or being perfect. It’s about being real, being humble, being able to share ourselves and touch the lives of others.” ~Unknown

Like so many of us, I spent the greater part of my life believing that unless something was perfect, it wasn’t good at all. There was really no in-between. If it wasn’t perfect, it was a failure.

One of the problems with perfectionism is that it’s common to believe it’s a positive thing. In our society, people tend to value it. If you’re someone that aims for perfection, you must be accomplished. Driven. Smart.

Have you ever had a sense of pride over being called a perfectionist?

Have you ever thought about why?

Speaking for my own experience, when someone called me a perfectionist, I felt like even though I didn’t believe I was perfect, it meant that they were perceiving me as being perfect. They saw me as being one of the best, or as someone who was talented. It was validation that I was seen as someone who was good at things.

My rabid thirst for this sort of validation fed the perfectionist machine for years.

If you’re wondering what it means to be a perfectionist, here are a few traits:

At one point in my life, all of those bullet points described me well. I wasted so much time worrying about approval and validation so that I could feel like I was awesome. But I never felt even close to awesome. I never felt good enough at anything.

Sure, there were times when I felt like I was good at something, but then I had to raise the bar. Just being good at something wasn’t enough. There was always another level to reach. The bar kept getting higher and higher, which isn’t necessarily a bad thing for people who are striving to make improvements in a healthy way, but for a perfectionist whose self-worth hinges on reaching the bar every time it’s raised, it’s not a positive.

After a lot of struggle in my life, I knew I needed to explore my perfectionist ways and find a way to be more compassionate toward myself. Perfectionism was holding me back from loving my life. And to be honest, I don’t think I intentionally set out to rid myself of the perfectionist mentality specifically. It came as a byproduct of a great deal of other personal work.

I began to realize that I had many beliefs that were etched into my brain that weren’t helpful. Beliefs that I never thought to question. These beliefs also severely hindered my ability to be happy and to live the life I wanted to live.

We all have belief systems that we don’t really think to question. We’ve grown up with them. We’ve learned them from the media, culture and society. But if we actually take a step back to notice that these thought patterns that inhibit our ability to grow and progress are there, we can start to question them.

Some common limiting beliefs that keep people stuck in perfectionism are:

I also stumbled upon another secret for overcoming perfectionism.

The secret is that I became okay with being average. I worked to embrace average.

If you’re a perfectionist, you know that being called average feels like the end of the world. It’s a terrible word to hear. My inner critic was not having it. “How dare you even think average is okay?” it hissed.

As a teenager, a twenty-something, and even a thirty-something, my world would have come to an end if I had accepted being average.

But sometimes life has a way of making you better.

Life has a way of putting things into your path and it presents opportunities for you to grow. Everyone has these opportunities at one point or another, but you have to notice them and choose to take advantage of them.

There was a time not too long ago when I went through a really difficult time and had to rebuild my life.

Looking back, I can see that the situation was an abrupt “lane-changer”—a push in a new direction to make a change. I was not living my best life and I wasn’t meant to stay stuck in that lane. I struggled with depression and anxiety, much of which was triggered by perfectionism.

By working on thoughts like the ones I listed above, and working to accept lowering my standards—the ones that told me that achievement and success were the only way I would be worth anything—I gradually learned to replace my old standards with this one:

Learning to make this my standard led me to a place where I am okay with being average. Eek! I said it. Average.

The difference is that my self-worth isn’t tied to whether I succeed or fail.

Here’s how I look at it:

At the end of the day, we are all just average humans. We are all the same. We’re humans trying to live the best life we can. We are more similar than we are different.

Don’t you think that if we all ditched our quest to be perfect, or better than everyone else, we’d feel a little happier? Don’t you feel like we’d all be a little more connected?

If you struggle with perfectionism, I invite you to take a look at the list of limiting beliefs above and see what resonates for you. What evidence can you find that can disprove these limiting beliefs? What would you like to believe instead? Try on those new beliefs and build them up with new evidence to support them.

And along the way, work on accepting that you are enough, even if you’re average.

Kortney Rivard is a certified life coach living in the Washington, DC area. A former aerospace engineer who found herself wanting a more fulfilling life, she is dedicated to helping women who are ready to stop brushing their dreams aside find the courage to go after their dreams and create a life they’re excited to wake up to. Check out her podcast, Real, Brave & Unstoppable HERE and learn more about her work at kortneyrivard.com.