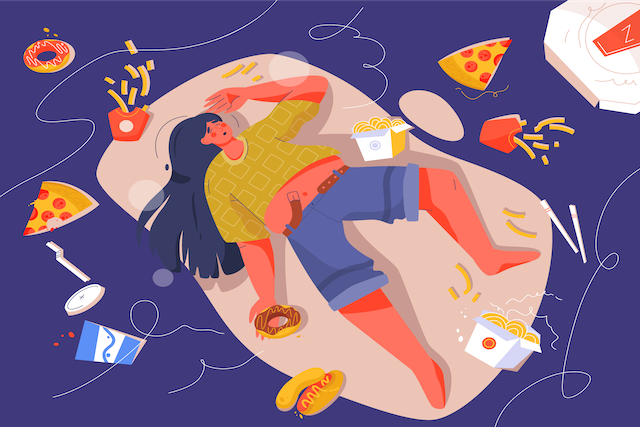 “Sometimes the thing you’re most afraid of doing, is the very thing that will set you free.” ~Robert Tew

I recovered from binge eating and bulimia by giving myself permission to binge. Sounds crazy, doesn’t it?

My decades-long weight and food war started in my teens, immediately after reading my first diet book, about Atkins, to be exact. I spent the following two decades trying to lose weight (only to keep gaining) and struggling with food.

By my early thirties, I’d finally managed to lose weight, but it hadn’t end the war, it had just started a new one. The war to try to keep the weight off and transform my body even further.

Thus began the decade of my “fitness journey.” I became an award-winning personal trainer and nutrition wellness coach and even a nationally qualified, champion figure athlete.

The weight and food war continued through it all.

I was introduced to clean eating by a trainer I hired before I became one myself. Four days into my first attempt at clean eating, I was bulimic—bingeing out of control then starving myself and over-exercising to try to compensate. Within eight months, I was officially diagnosed.

Bingeing to the point of feeling like I may die in my sleep became common, and I realized I had two choices: potentially eat myself to death or heal. I chose the latter.

I sensed that understanding what was driving those behaviors was the key to learning to change it all, so I decided to get busy learning just that.

And I recognized that meant I had to stop obsessing over (and hating myself for) my food choices. They were not the problem; they were the symptom of whatever was going on in me that was driving those behaviors.

I even gave myself permission to binge as much as I wanted.

And I slowly started bingeing less and less. Now it’s been years since I have—the drive is just completely gone.

I know permission to binge sounds crazy, but has trying to force yourself not to binge or eat “bad things” been working? Is trying to judge, control, criticize, restrict, and shame your way to “eating right” and/or health and happiness working?

If so, carry on. But if what you’ve been doing hasn’t been working, stay with me while I explain two reasons why permission is so vital, and the helpful versus unhelpful way to practice it.

Why Is Permission So Vital?

Permission to eat whatever we want helps reverse two of the biggest reasons we eat self-destructively: restrictions and self-punishment.

Food restriction (the rules around what we think we should or shouldn’t be eating) caused my cravings, overeating, and even bingeing.

Science has shown that food scarcity/restriction activates a millennia’s old survival instinct in our brains that triggers cravings, compulsions, and even food obsessions until we “cave.”

Self-punishment contributes to bingeing because we treat ourselves how we believe we deserve to be treated.

We punish ourselves by trying to restrict even more, or we go in the other direction and overeat the things we keep telling ourselves we’re not supposed to have, which fuels the cycle.

How can you want to make nurturing or nourishing choices for yourself when you’re hating, judging, shaming, and criticizing yourself? You can’t.

That thought, “Oh well, you already screwed up, you may as well eat the rest and start again tomorrow”—that all or nothing thinking, the bingeing, the self-sabotaging—it’s being driven in large part by those two things: restriction and self-punishment.

Full permission, even to binge, helps start to shift both.

It stops the feelings of scarcity around certain foods (so they lose their allure), and it helps improve the relationship you have with yourself (so you’re no longer judging and berating yourself for eating “bad things”).

Here’s where the biggest lie of all has steered us in such a toxic direction: the idea that our natural compulsion is to “be bad” and eat all that bad stuff is bull.

But we’re actively taught to ignore or disconnect from them, and we get so good at ignoring and disconnecting from our bodies’ natural cues that we can’t even hear them anymore.

We learn patterns of thinking and behaving that get programmed into our brains and end up driving our choices, rather than the natural instincts we were born with.

By the time we get to adulthood, the ways we eat, think, and live just become learned patterns of behavior—that can be changed when you stop trying to follow other people’s rules and start understanding how you got where you are.

When you spend your life stuck in that “on track” versus “off track” cycle you’re completely disconnected from yourself, your body, and what you actually want and need.

The two things that are driving you and your choices when you live in that place are either:

Neither have anything to do with you—with what you, at your core, actually need or want.

By giving yourself full permission to eat what you want, when you want (yes, even permission to binge) you’re given space to reconnect with yourself and what’s best for you.

What You Think Permission Is Vs. What It Actually Is

There are two ways to do this whole permission thing: the way you think you’re doing it when you’re “off track” and the helpful way.

Typically, when we “fall off track” or binge, we start “allowing ourselves” all the foods we can’t have when we’re on track, but the whole time we keep telling ourselves it’s okay because when we get back on track, we won’t have it anymore. Then we feel bad and guilty the whole time.

That’s not permission, it’s a clear example of the food restriction/self-punishment cycle that fuels feeling out of control around food/overeating or bingeing.

How? It’s restrictive and punishing. We know at some point we won’t be “allowed” to have it anymore—ya know, when we start “being good”—and since we’re already “being bad” we may as well just eat all of it, then we end up not feeling great.

True permission means losing all the food rules and judgments. I know it sounds scary and wrong, but it really is key to learning to want to eat in ways that serve you and hearing your body when it tells you what makes you feel your best.

Begin noticing the things you’re saying to yourself around your food choices and start noticing how the foods you’re eating make you feel after you eat them.

Do you feel energetic and good when you eat that thing, or do you feel bloaty, lethargic, and sick? How do you want to feel?

If you’re eating lots of things that are making you feel the latter, just notice that, get curious about why, and most importantly, extend yourself compassion and kindness.

The next time you’re about to eat something that you know makes you feel terrible, remember how it made you feel last time and ask yourself, do you really want to feel that way right now?

If you think, I don’t care, ask why? Why do you not care about treating yourself and your body well? Don’t you want to feel good? If you keep hearing, I don’t care, that’s a sign more digging is likely required, but permission is still where you start.

Notice how often through the day you judge yourself for eating something you think you shouldn’t. How does that judgment affect the choices you make next?

Remind yourself that what you eat doesn’t determine your worth, and you’re an adult. You’re allowed to eat whatever you want.

Giving myself permission to eat whatever I wanted, even to binge, was the first step toward a binge-free life because it helped me learn to change the biggest reasons I was bingeing in the first place: destructive thoughts, habits, and behaviors that were caused by food restriction and self-punishment.

It’s how you start learning to end the food war, to trust yourself and your body, to stop feeling out of control around food, and to start making choices that make you feel your best, because you deserve to feel your best.

Drawing on her own healing journey plus over a decade of professional knowledge, education, and experience, Cognitive Eating Academy founder Roni Davis guides chronic dieters through the process of uncovering and changing the thought and behavior patterns that cause weight and food struggles. Her clients heal their relationships with food while learning to approach their overall well-being from a place of connection, self-trust, compassion, and love. Grab her free ebook Why’d I Eat That? here.